EX-COMMISSIONER KILLS HIMSELF IN HERALD LOBBY

Former Miami commissioner Arthur E. Teele Jr., under indictment for taking bribes while in office, walked into the lobby of the Miami Herald building Wednesday evening and shot himself in the head. He died less than two hours later at Jackson Memorial Hospital.

Wearing a dark suit, a light-blue shirt and a crimson tie, Teele , once one of Miami-Dade's most powerful politicians, entered The Herald lobby at about 6 p.m., and within minutes pulled a gun from a green canvas bag.

Felix Nazco, 35, the security guard, said before pulling the gun Teele told him: ``Tell DeFede to tell my wife I love her,'' referring to Herald columnist Jim DeFede.

Teele then stood with the gun to his head and gazed out at the street through the lobby's glass doors. As police arrived, he shot himself, security guard Eduardo Pavon said. Teele fell on his back. The pistol clattered across the terrazzo floor.

Miami fire-rescue workers arrived seven minutes after a security guard called 911. A Miami fire-rescue spokesman said Teele had two bullet holes in the back of his head, and Miami police told The Herald he was declared dead at 7:50 p.m. at Jackson Memorial Hospital's Ryder Trauma Center. He was 59 years old. 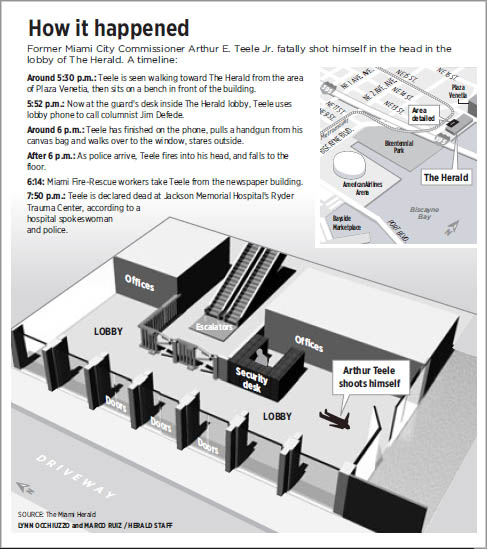 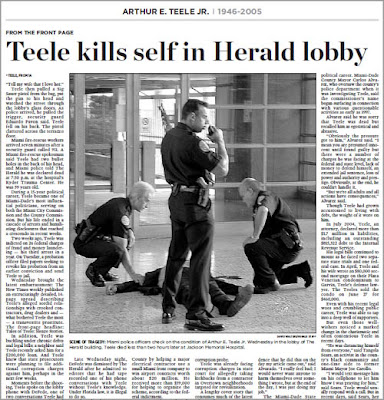 From The New York Times:

MIAMI, July 28 - It seemed like a throwback to "Miami Vice": an eccentric politician, recently accused of money laundering and soliciting male prostitutes, fatally shoots himself in the lobby of The Miami Herald after an anguished phone conversation with a star columnist.

But the storyline grew even stranger on Thursday as employees of the newspaper reacted with outrage after learning that the columnist, Jim DeFede, had been fired for secretly taping his conversation with the distraught man - a possible violation of state law.

Mr. DeFede, who chronicles the surreal politics of South Florida, said his conversation with the man, Arthur Teele Jr., a former city commissioner recently indicted on federal charges of mail fraud, wire fraud and money laundering, was so disturbing that he quietly began recording it "out of concern" for Mr. Teele.

Feel free to comment on anything you read here.

However, all comments must first be approved.

Please note that spam and spam links will not be tolerated or approved.