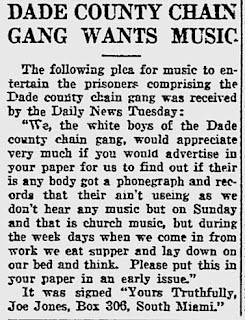 In the years since its founding in 1896, the town had grown from a small settlement on the banks of the Miami River with a population of a thousand, to a bustling mid-sized city of a quarter-million.

On the surface, 1950's Miami appeared to be small-town friendly.

Former Florida governor and U.S. senator Bob Graham, a 19 year-old college freshman in 1956, remembers the time fondly: "There wasn't a better time and place to grow up. Miami was a relatively small and neighborly place; quiet and laid back."

Downtown Miami was the city's business, entertainment and cultural hub. Plans for large suburban shopping centers with multi-screen theaters were still on the drawing boards. The influx of Cuban refugees would not occur for another five years.

My-am-uh - as many locals called it - was as Southern, conservative and deeply religious as any comparably sized town in Alabama, Georgia or Mississippi.

But for those who cared to look, an undercurrent of unfairness was visible just below Miami's placid facade.

White males dominated the city's political power structure, businesses and newspapers and the word "change" was not in their vocabulary. They made the rules and inequality was the rule of the day. Blacks were barred from restaurants, theaters and beaches frequented by whites. Miami's schools - like the rest of the South - were also segregated.

"Before Elvis, there was nothing." -John Lennon

In August 1956, a lavender Lincoln Premiere speeding south on US1 was bringing change to Miami - whether it wanted it or not. One of the car's occupants was a 21 year-old Memphis truck driver-turned-singer named Elvis Presley.

Presley was no post-war balladeer. He sang "rock 'n roll"... a new kind of music that took its name from a euphemism for raunchy sex - as in "my baby loves to rock 'n roll all night long."

"This boy had everything. He had the looks, the moves, the manager, and the talent. And he didn’t look like Mr. Ed like a lot of the rest of us did. In the way he looked, way he talked, way he acted - he really was different." -Carl Perkins

Read the rest of the story of Elvis Presley's 1956 Miami visit by clicking here.